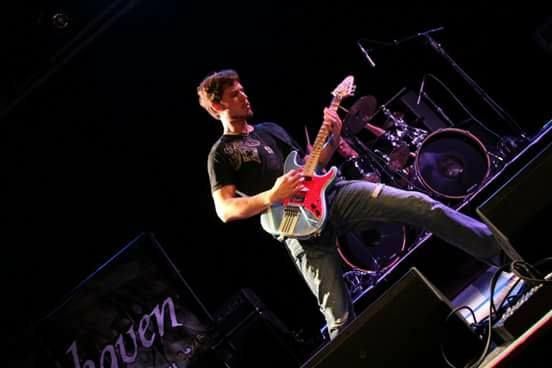 I started playing guitar at age 14, I found an interest when my friend wanted to play because his Dad had a guitar, he only knew a few songs, ''Back In Black'' and ''Cat Scratch Fever''. We thought it was cool and that we should try to start a band, I first considered playing bass, but then I decided that it wasn't as exciting as the electric guitar. I would even save my lunch money so I could afford my first guitar. I would watch MTV at the time and see bands like ''Lifehouse'' and I wanted a guitar like their's. It all seemed so exciting to me. The first thing I would consider is before you buy a guitar, already have some music you like or that you would like to learn. I didn't know a lot of music, I had heard some classic rock because of my Mom and cousin. My favorite band at the time was the Offspring, and Metallica. So, I knew I would really want to learn some of their song's to begin with. I thought that the Offspring was an easier place to start. I didn't know Van Halen or Led Zeppelin yet.

Then the next thing is to decide which guitar to buy, I recommend a local guitar store. I found a store called Mehas Music in Hamilton, Ohio. I first rented a guitar for a few months, then the first guitar I owned was a pacific blue, Yamaha Pacifica. It was a great guitar to learn on. I worked at my Dad's shop to help pay for it, but I mostly paid for it myself. Then I started to look at guitar tabs, and try to understand how to read them before I even got my first guitar, I was googling how to play. Then I would take some guitar lessons, it's good to connect with a teacher and they can show you how to read music or tabs, basic chords, technique and some riffs or songs.

After a few months, I was getting ahead of my guitar teacher and learning to read tabs well, so I decided I had enough guitar lessons. So, then my next strategy was looking up guitar tabs online and learning my favorite songs. My favorite guitar tab website was Guitar Tabs Universe. The very first song I learned and that many guitarist learn was ''Smoke on the Water'' by Deep Purple. I didn't even learn to play it right, but then later I would. I learned some basic chords, but then I wanted to take on the challenge. I started learning a bunch of riffs like Metallica ''For Whom The Bell Tolls'', and AC/DC ''Hells Bells''. Then I started to learn the Offspring, the first song I learned all the way through was ''Original Prankster'', I was sharpening my guitar tab sight reading skills. I started to learn much quicker and had a snowball effect. I then learned many other Offspring songs and saw that many of them used similar chords or patterns in the music.

Next I really got into Metallica and our whole band learned ''The Unforgiven'', it was the only song that we knew all the way through together as a band. I also recommend buying anthology books. I bought the Van Halen anthology, after I discovered Van Halen in Guitar World magazine, and bought the Van Halen Best Of CD. I saw that ''Eruption'' was the 2nd greatest solo of all time, so I started to learn it after about 6 months of playing guitar. I also had the Led Zeppelin anthology and learned most of the riffs from the early Led Zeppelin era. I also got into Nirvana because of my friends and I learned all the popular hits.

One of the most important things to play great guitar solos is that you learn scales. My guitar teacher taught me some scales, but then I started to learn them every week in Guitar World by Zakk Wylde, I eventually learned all of the Pentatonic scales, and how to improvise. The first guitar solo I learned completely was ''Stairway to Heaven'', then this is when I started to improvise and make things up with what I learned from that song. Then the next best thing is to just keep learning more songs, and solos, then you can improvise with many of the riffs or make them your own.

The next step would be to learn more scales and learn the major and minor scales up and down the entire neck, I also learned all the notes on the guitar in this phase. I also started to watch many videos of guitar players online, because I was a visual learner. I used Guitar World magazine a lot, because they had lessons every month and I would learn many of those lessons, they would teach me many guitar licks and riffs. Then the process is to keep building your playing, learn more songs and solos.

Playing in a band helps, connecting with musicians, but also jamming and improvising. Playing live shows in front of people helps get you comfortable on stage playing in front of others. Our first show was in front of our own family, even though we were very nervous and palms were sweaty. One of the best things that helped my playing was learning lots of exercises, I learned chromatic exercises up and down the neck, as well as legato exercises. It helped to clean up and smooth out my playing, and I also began to practice with a metronome. Everything takes hours of playing as well as a lot of repetition. I would have a Guitar Grimoire book with all the scales, as well as exercise and chord books. The next thing I did was I just kept pushing my playing over the years, learning riffs, practicing repetition, and lots and lots of improvising.

I mastered a lot of the Offspring, Led Zeppelin, Van Halen, Ozzy Osbourne, Metallica, Nirvana and Creed. These were the major bands that I was into and influenced by. Then I decided to take on something more challenging and advance my playing. Next it was Stevie Ray Vaughan, Yngwie Malmsteen, and Paul Gilbert. These are the guitar players I liked and were my taste. So, I learned their riff's and song's and began to improvise with it. I kind of combined all the styles and a lot of my favorite riffs, or licks. Then I started to changed them and make up my own original stuff. Another important thing that I did was I would always break things down into smaller parts. I would work on songs in section and riffs, in sections.

So, after years of practicing, learning scales, exercises, riffs, licks, and spending time with a metronome practicing repetitiously and also spending a lot of time improvising with scales, then you can become a virtuoso guitar player. You can really almost apply this method to anything.